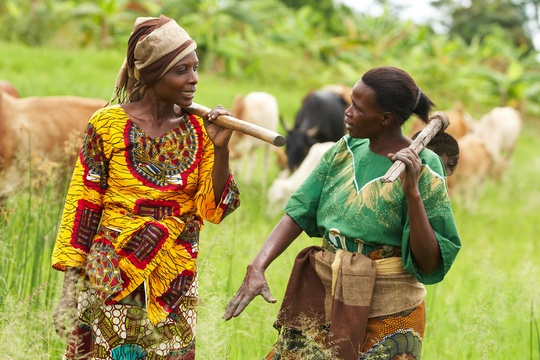 The world has seen a host of efforts to fight hunger. Thrive calls for a new, focused ambition and determination to the root causes of hunger and poverty.

Millions of people are locked in a vicious cycle of hunger and poverty. Poverty means parents can’t feed their families enough nutritious food, leaving children hungry and malnourished. Malnutrition leads to irreversible stunted development and shorter, less productive lives. Less productive lives means no escape from poverty. We have to break this cycle. Join our conversation to learn how we can stop malnutrition for 15 million children and end poverty for 50 million. Hear about the campaign mobilizing thousands to urge elected leaders around the world to support smart, sustainable agriculture investments.

This session will be an informal fireside chat, so we're also looking forward to hearing your opinions and experiences.

Laurie Moskowitz, ONE Senior Director for U.S. Campaigns, has nearly two decades of national campaign experience in political strategy and grassroots organizing. Today Laurie leads ONE’s campaign and field strategies to create and support political will for smart, bipartisan global poverty and disease-fighting legislation by expanding grassroots membership, mobilizing key constituencies such as political and business leaders on both sides of the political aisle, and raising awareness of global poverty issues in communities nationwide.

Great Article it its really informative and innovative keep us posted with new updates. its was really valuable. thanks a lot. judi casino online

Super site! I am Loving it!! Will return once more, Im taking your food additionally, Thanks. Alternative for equal

This article on the pyramid to plate organization is a great one, and I am glad that this ras el hanout article has been shared here today. I am going to share this with my friends now, and hopefully it benefits them.

Thanks for the nice blog. It was very useful for me. I'm happy I found this blog. Thank you for sharing with us,I too always learn something new from your post. UFABET

Great post I would like to thank you for the efforts you have made in writing this interesting and knowledgeable article. best face primer for over 50

James Raphael
about 1 year ago

Using turnips in your food is good for your health as it has many benefits. The best way to eat this is by roasting it. Its pulp is very sweet and roasting it on fire softens its pulp and makes it delicious. Other turnip recipes are available at best dissertation service that you should try making at home.

Connor Nugan
about 1 year ago

It makes my heart sad that there is no peace in his world all of the leader that holds this world in this world are just doing good for their people but according to dump apple download they don’t concern with the people of under developed countries and for them their decision matters a lot.

This session has passed.

Wait!! This class is in Austin, TX, which we think is kinda far away from .

If you're no longer in change your location here , or continue signing up for this class

Any criticism will make us work harder. Any praise will make our day. Send us love/hate notes!

HourSchool, Inc. 2013
Aspire to inspire from the heart of Austin, Texas